How Running changed my life for the better, by Peter Heckles

Sorry it has been a few months since posting a blog, this is due to a month in Vietnam and a ridiculously busy schedule upon my return.

I am constantly telling my clients of the many benefits of running, there is nothing more rewarding than introducing various routines into their programs and witnessing the results first hand.

I have been meaning to write about Peter, a friend of mine, for some time now.  He has used running to turn his life around, in more than one way.

I was initially going to write about him, then I thought what could be better than getting the story from the horses mouth.

So in the words of Peter Heckles……..

What started this burning desire for running and all things since? Excellent question, my dear Watson (Toby your readers have become my sidekick in one swift sentence).

From a young age, possibly 5 or 6, I have always wanted to be best at something which has matured into being the best I can be. Started with football which died out with injury, if I am being honest was inevitable with my limited talent. Attitude and competitiveness with a side helping of fearless and aggressive approach made me hard to play against. I was always happiest when I was in the middle of the field getting stuck in toe to toe with others. Probably why I was injured a lot.

Before heading to University I still played 6 a side but soon dropped off when other pastimes became important (Apparently not studying), I gained weight (up to 20 stone) as I was eating everything and anything, especially working as a delivery driver for my first year, plus drinking and going out (a lot).

Something had to change, when I changed course from Psychology to Youth and Community Education. I always wanted to help people, now I could and learn to do it on the job. I really started to struggle to manage study, work, relationship and current pastimes (going out on the piss) and this created a huge strain on all aspects of my life.

I found myself overweight (see photo after my first 10k) and overwhelmed and it was at this point in my life when I realised that I had reached a fork in the road. I could continue on the path I was on and risk losing everything I had worked so hard for, or I could make some big changes and turn it around. First step: current pastime stopped. Really important moment but it did leave a void. Step two: relationship back on track (now my lovely wife). Step three: focus on study and job. Life was good but the void was still there …

Luckily my uncle, once a 34 minute 10k man, was getting back into running, and so we started to train together. I had nothing in mind but where I worked wanted to raise money running a 10k. So I trained and followed a plan (of sorts).

I did all my runs way to quick in training, I know why now, I was trying to prove my fitness as soon as stepped out the door. My calf muscles ached like crazy. I had never even had pair of trainers fitted.

Come around race pre week, my taper was … running the 10k route … at race pace three days before! Unsurprising, I did a similar time on race day. However, I was hooked and wanted to beat the time! I did two weeks later at Swansea 10k in the rain … still not enough though! Will it ever, probability not but I love it!

Thanks for reading, TK-fitness Cardiff 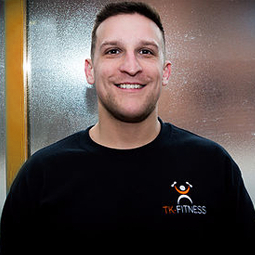 Toby King is a personal trainer in Cardiff that helps his clients lose weight, build muscle and improve their health. If you would like to hire Toby to help you achieve your fitness goals please get in touch.

We are still taking sessions while adhering to the Governments recommended 2-metre social distancing guidelines. Skype and Zoom sessions are available too. Get in touch to find out more.